After the great flowering of Gothic style, tastes shifted back to the straight lines and rational geometry of the Classical era: the Renaissance, Rinascimento in Italian, stretched roughly over the years from about 1340 to about 1550. The interest in nature and the study of a revived Classical antiquity were already present in late Romanesque and Gothic culture; towards the end of the 14th century a surge of interest in Classical learning and values, together with the economic wealth of central and northern Italy, brought to an extraordinary cultural growth, a new way of looking at the world.

The Renaissance witnessed the discovery and exploration of new continents, the growth of commerce, and the invention or application of powerful innovations as paper and printing. To the thinkers of the day, it was primarily a time of interest towards Classical learning and wisdom. Mathematical perspective enabled architects and painters to depict reality: Brunelleschi devised the method of perspective for architectural purposes, and ten years later, the painter Masaccio applied the new method even more spectacularly in his fresco La Trinità, where the barrel vaulted ceiling is incredible in its complex, mathematical use of perspective. 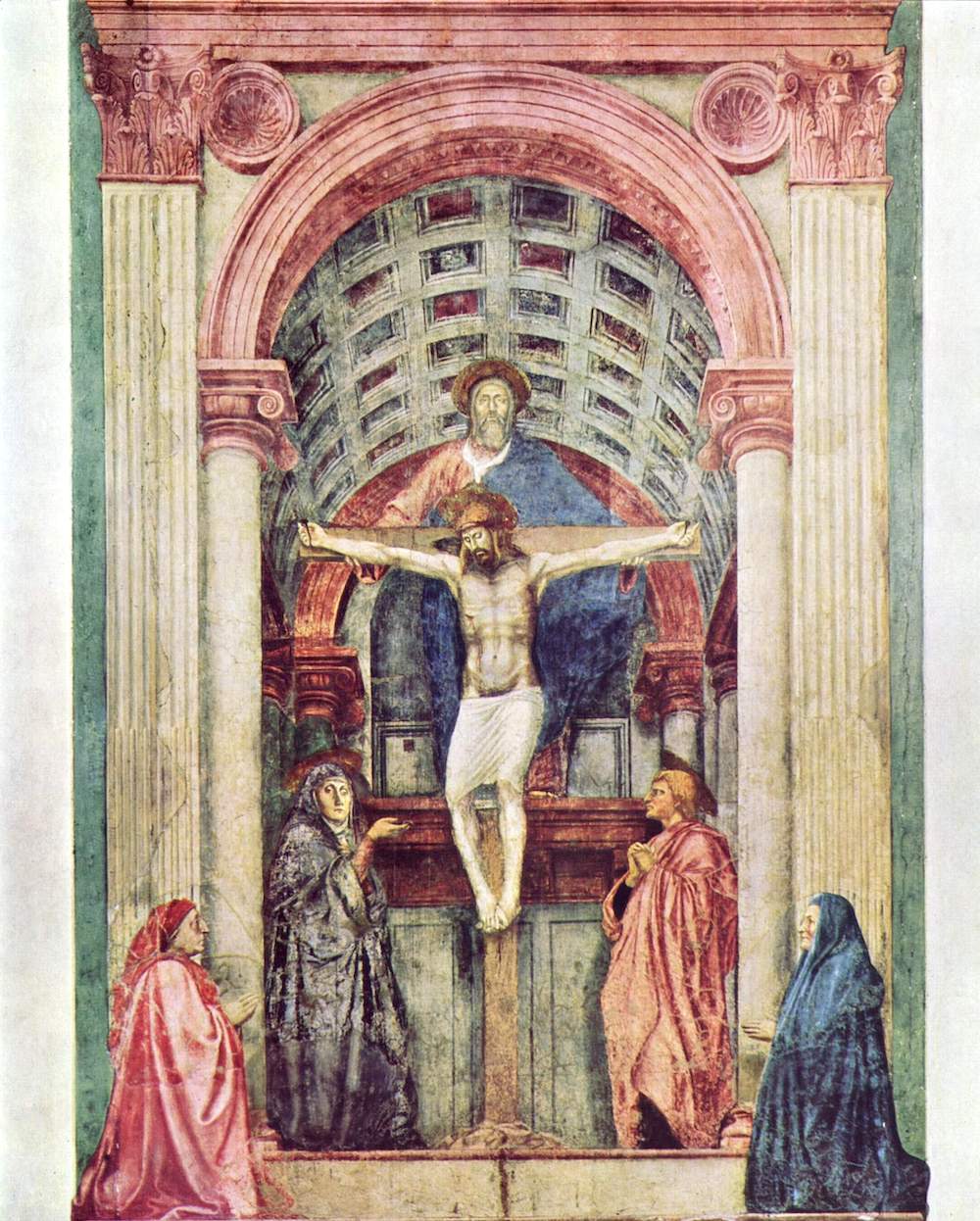 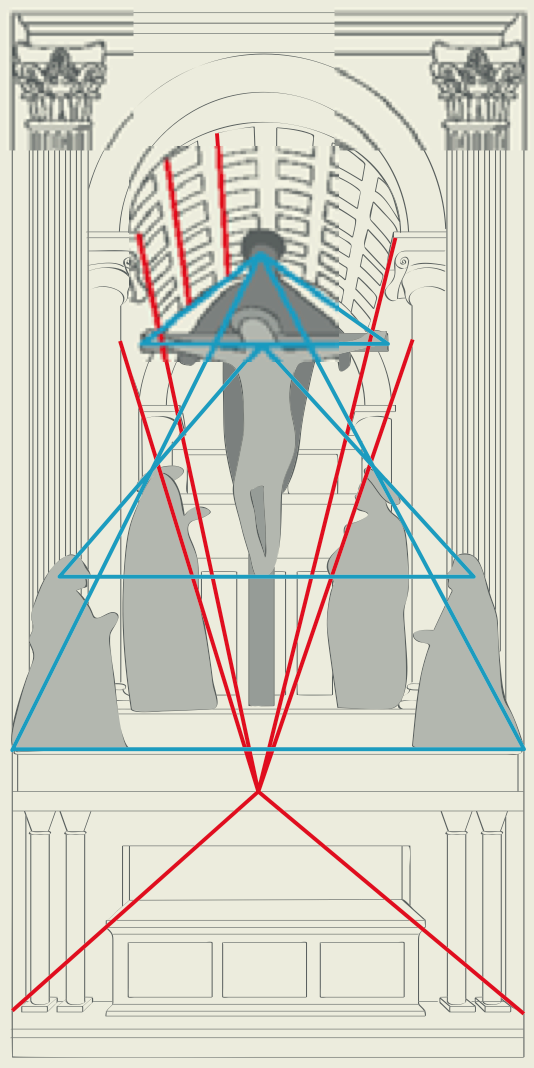 Masaccio, La Trinità, use of perspective

In architecture this meant a revival of ancient Roman forms, such as the column and round arch, and the dome, as seen in ruins of ancient buildings still visible throughout Europe. As in the Classical period, proportion was the most important factor of beauty, resulting in clear space and mass, which distinguishes the Renaissance style from the more complex Gothic. Filippo Brunelleschi is considered the first Renaissance architect. Leon Battista Alberti’s Ten Books on Architecture, inspired by Vitruvius, became a bible of Renaissance architecture. From Florence the early Renaissance style spread through Italy. 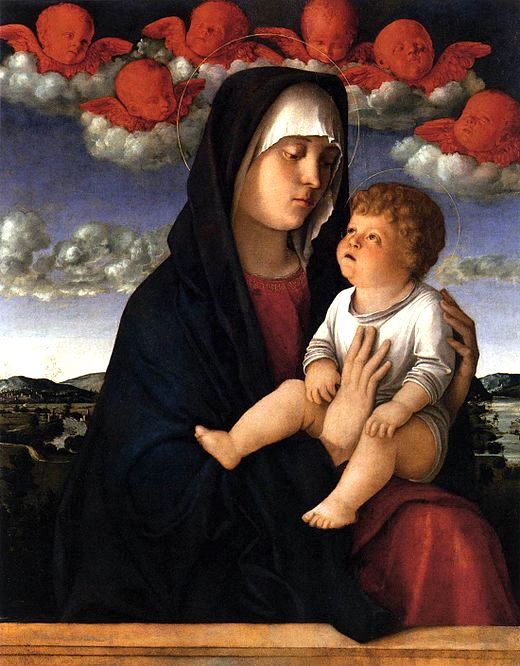 The city of Florence was indeed the birthplace of the Renaissance, and in particular of Renaissance painting, although later in the era Rome and Venice assumed increasing importance in painting. The dates for these periods represent the overall trend in Italian painting as the lives of individual artists and their personal styles overlapped across different periods. The Proto-Renaissance began with the professional life of the painter Giotto, who can be considered as the link between the earlier style of painting, still influenced by Byzantine patterns, and the new concepts based on real man and real time. The Early Renaissance style was started by Masaccio and then further developed by artists such as Paolo Uccello, Piero della Francesca, Sandro Botticelli, Verrocchio, Domenico Ghirlandaio and Giovanni Bellini. The High Renaissance period was that of Leonardo Da Vinci, Michelangelo, Raffaello, Correggio, Giorgione, and Tiziano. The Mannerist period included the latter works of Michelangelo, as well as Pontormo, Parmigianino, Bronzino, and Tintoretto. 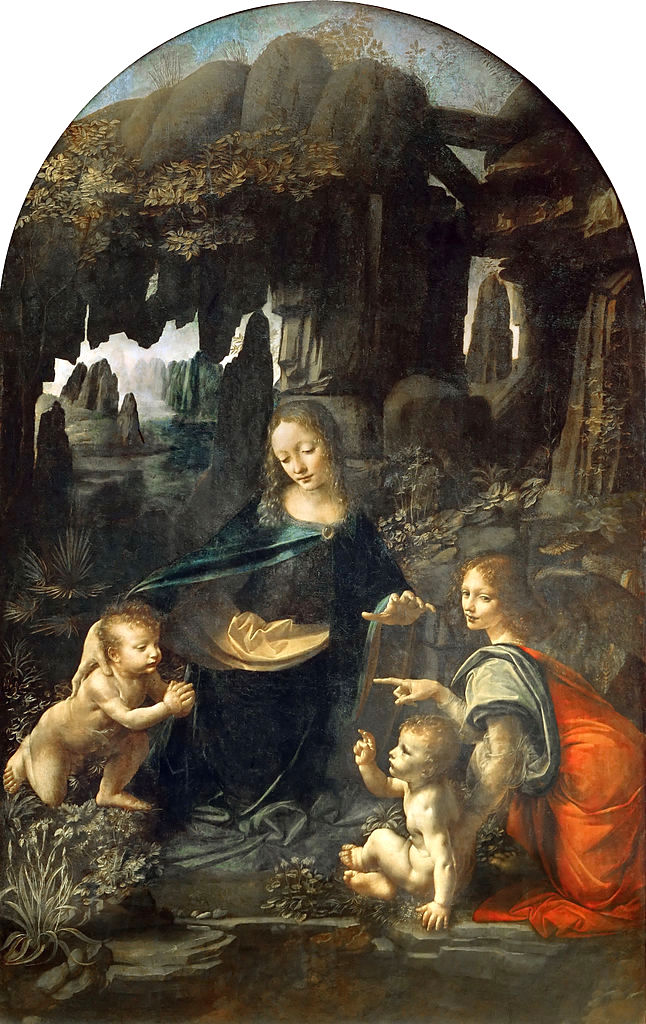 The incredible achievements of these artists can’t be summarised in a brief guide like this one; but we can’t avoid to mention one of the great Renaissance minds, Leonardo Da Vinci (1452-1519) who innovated artistic traditions and techniques. He created innovative compositions, investigated anatomy to accurately represent the human body, considered the human psyche to illustrate character, and experimented with methods of representing space and three-dimensional objects on a two-dimensional surface. In La Vergine delle Rocce, the figures of the Virgin Mary, the Christ Child, the infant John, and an archangel are arranged in a pyramidal composition, and interact with one another through gestures and glances. Moreover, Leonardo also excluded traditional holy signifiers, such as halos, to depict the Holy Family as less divine and more human, in line with the spirit of the Renaissance.

Paolo Veronese, Cena a casa di Levi (the Feast in the House of Levi), 1573, oil on canvas (Gallerie dell’Accademia, Venezia)

The distinctive Venetian school of Italian Renaissance painting includes artists such as Tiziano, Giovanni Bellini, Gentile Bellini, Giorgione, Tintoretto, and Paolo Veronese. The unique character of this painting is achieved mostly through colour and mood, and is traditionally contrasted with Florentine painting, which relies on a more linear disegno-led style. Paolo Veronese (1528-1588), byname of Paolo Caliari, was one of the most prominent painters of the Venetian school. His works are often huge, vastly peopled canvases depicting allegorical, biblical, or historical subjects in splendid colour and set in a framework of classicising Renaissance architecture. A master of the use of colour, he also excelled at illusionary compositions that extend the eye beyond the actual confines of the room. 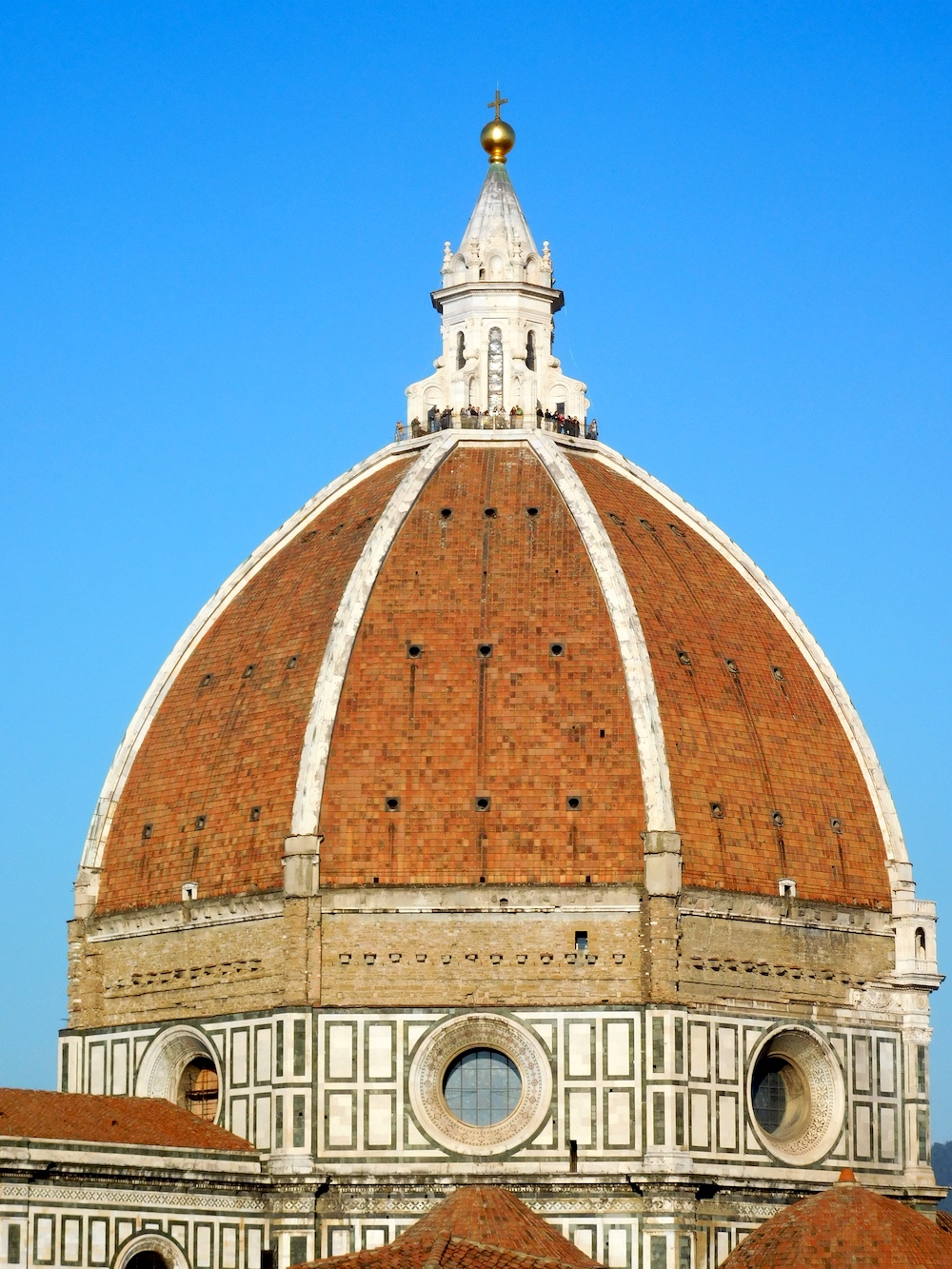 Filippo Brunelleschi (1377-1446) is one of the founding fathers of early Renaissance architecture in Italy, architect and first modern engineer. He is credited with the development of the mathematical technique of linear perspective in art, which governed pictorial depictions of space. His major work is the cupola (dome) of the Duomo di Santa Maria del Fiore in Florence (1420–36), constructed with the aid of machines that Brunelleschi invented specifically for this project. He constructed the dome without the traditional wooden framework, by placing the brickwork in herringbone patterns between a framework of stone beams. This construction technique had been evolved by ancient Roman architecture, which the major artists and architects at the time were deeply familiar with, either directly by studying the monuments in Rome, or through the influence of classical elements in 11th- and 12th-century Tuscan Romanesque and proto-Renaissance buildings such as San Miniato al Monte.

Andrea Palladio (1508-1580) is regarded as the greatest architect of 16th-century northern Italy. His projects for palaces and villas, notably the Villa "La Rotonda" (1566–67) near Vicenza, and his treatise I quattro libri dell’architettura (1570; The Four Books of Architecture) made him one of the most influential figures in Western architecture. In 1541 and again in 1547 Palladio visited Rome, and these visits greatly influenced his designs. He saw the work of the greatest architects of the Roman High Renaissance style, such as Bramante, and also studied ancient Roman antiquities, notably the baths. Palladio’s principal ideas on palace design were formed between his first works of 1540 and his visit to Rome in 1554–56. 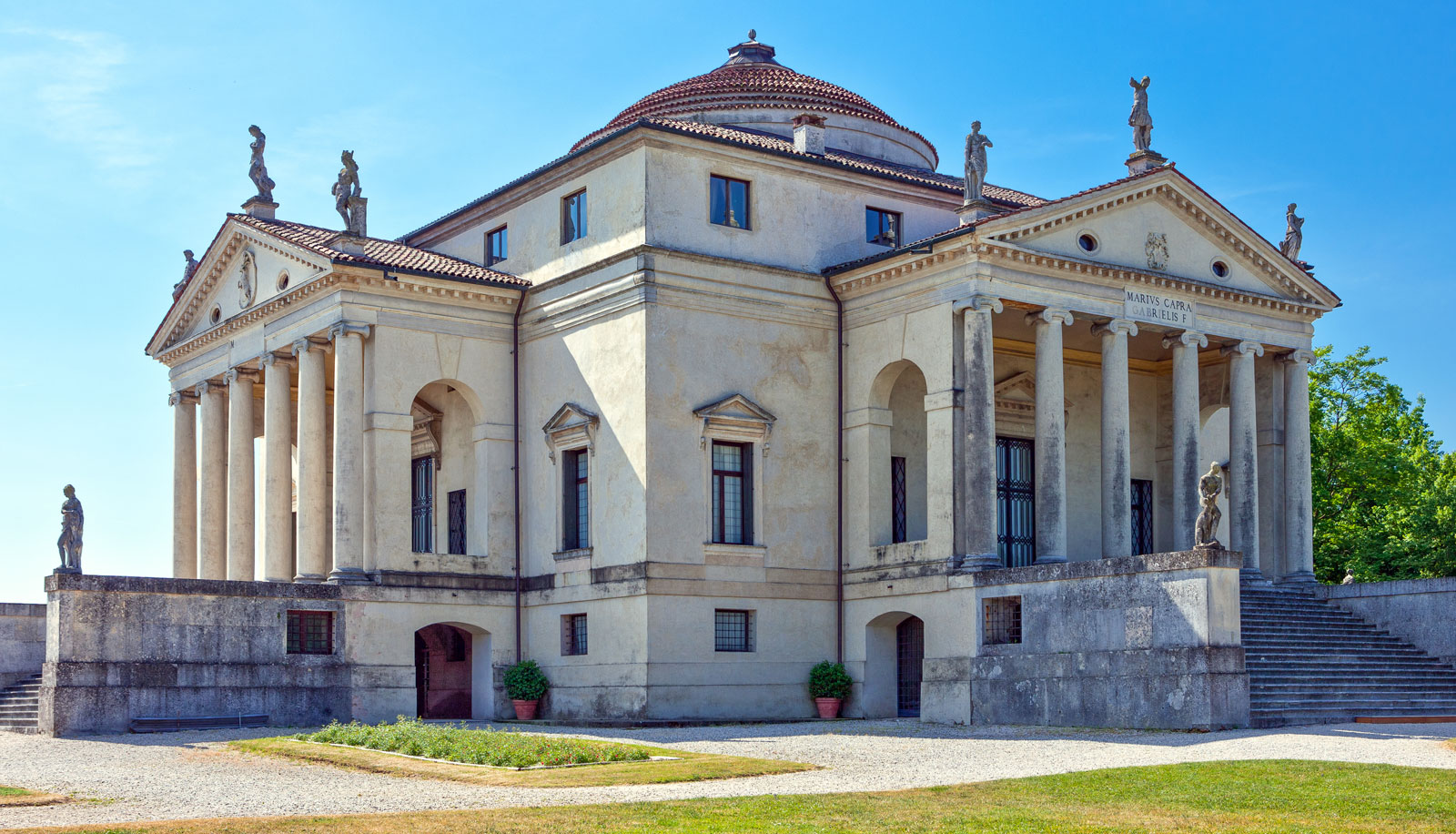 During his stay in Rome, Palladio published Le antichità di Roma (The Antiquities of Rome), which for 200 years remained the standard guidebook to Rome. One of his most famous designs is the Villa Almerico-Capra, known as La Rotonda, one of the most recognisable buildings of the Renaissance. The villa is based on ancient Roman classical models, together with an innovative design which was going to influence Western architecture in the following centuries. Palladio designed a sophisticated construction characterised by balance and uniformity. The design of the building is completely symmetrical; it presents a square plan with identical porticoes from each of the facades. At the centre of the building, a dome stands over a circular hall. Palladio was concerned with harmony and mathematical consonance and used the square and the circle as essential and elegant forms. 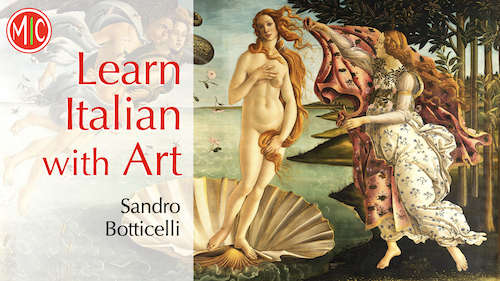 The first 3 episodes of Learn Italian with Art are now available on our YouTube channel. With additional learning content for our patrons.

basilica - Originally a Roman public court building; later, Christian buildings of the same shape, with a central nave and aisles.

bassorilievo - Low relief; a projecting image with a shallow depth.

cattedrale - Cathedral; the central church of a diocese that contains the bishop's seat, cattedra (Latin cathedra).

cupola - Dome; an architectural element that resembles the hollow upper half of a sphere.

facciata - Facade; the front side of a building. Usually the facade of a church or palace.

mosaico - Mosaic; an image built up from small pieces of stone, glass or ceramic.

pala d'altare - A religious painting placed behind the altar in a church.

Kenneth Bartlett, The Renaissance in Italy: A History (2019)

Michael Wyatt, The Cambridge Companion to the Italian Renaissance (2014)